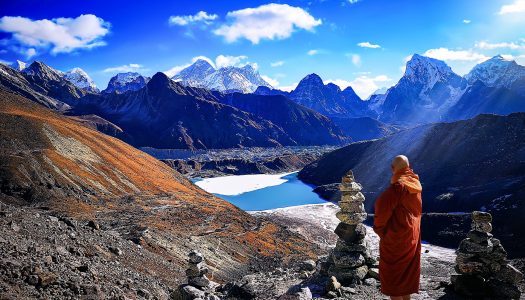 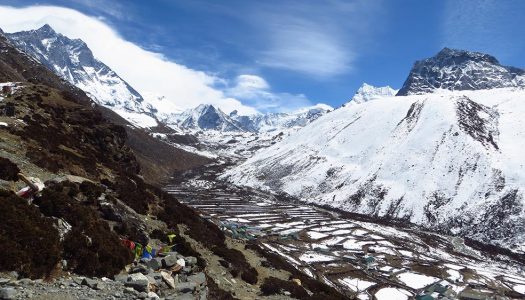 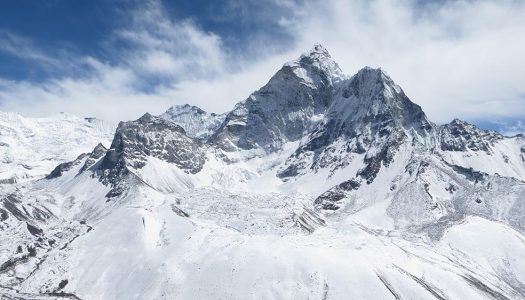 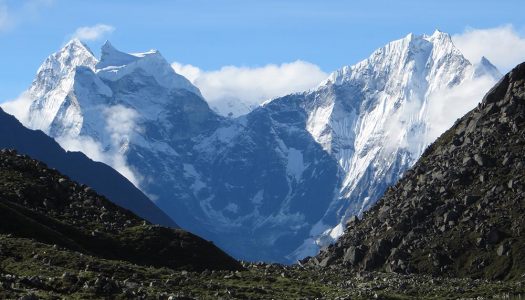 The Everest region, belongs to the Solukhumbu district, is located in the northeast of Nepal and extends into a series of impressive valleys filled with glaciers above the main shopping center of Namche Bazar. Solukhumbu is the home of the legendary Sherpas and the highest peak in the world, Everest, at 8848 m.

The main ethnic groups that live in the Everest region are Sherpas, Rais, Tamangs, Brahmins and Chhetrris. The wild animals that can be seen are the mountain goat, the musk deer and the deer. Birds include impeyano pheasant, ravens and snow pigeons…

The main route of the trail to Everest Base Camp and the Kala Pattar viewpoint belong to the eastern side of the Valley, along with the Chukhung valley leading to the Amphu Labsta and the popular Imja Tse (Island Peak). In the center of the Khumbu Valley is Gokyo, which contains a series of turquoise glacial lakes under the impressive Cho Oyu massif (8201m). To the west lies the less visited Bhote Koshi Valley, which leads first to Thame and then west to Tashi Labsta or north to Nangpa La, a port used by Tibetan merchants and refugees. To the east is the popular Everest Base Camp, located above the Khumbu Glacier and at the foot of Mount Kala Patar.

Some of the most popular treks are the Gokyo Lakes, the Cho La Pass, the Renjo La Pass or the visit to the Tengboche Monastery … The Renjo La offers perhaps the best viewpoint of the whole region with views of the lakes of Gokyo, Mount Everest and the peaks that surround it, and, on the west side, the region that takes us from Lunde to Thame, where it can give a feeling of being in a remote place compared to the main trails.

-EVEREST BASE CAMP
The trail to Everest Base Camp is Nepal’s most famous route. We contemplate the highest mountain on earth, enjoy Sherpa hospitality and are inspired by the Himalayas. Our trekking Everest Base Camp is an 11-day adventure (16 days in total counting the stay in Kathmandu) that begins and ends in Lukla, the airport just south of the Sagarmatha National Park. Our trip starts with a morning flight from Kathmandu to the Lukla mountain lane, in the heart of the Khumbu region. It follows a fairly easy day of around four hours until our first stop at Monjo.

After spectacular views of Everest along with the Nuptse, Lohtse and Pumori peaks we go back to Lukla for our flight to Kathmandu. Two days above Lukla (2800m), Namche Bazar (3440m) offers a comfortable acclimatization stop and the opportunity to get to know the Sherpa community a little better. Khumjung and Khunde are above Namche, and this is where Sir Edmund Hillary (the first climber to conquer the Everest summit with Tenzing Norgay) began his pioneering work with local development projects.

The famous Tibetan Buddhist temple of Tengboche is one day away from Namche, and then the highest settlements of Dingboche, Pheriche and Lobuche take us to Gorak Shep, the last place where we can find accommodation before arriving at the Base Camp that is 1 hour away. In Gorak Shep there is no view of the summit of Mount Everest, but we find ourselves surrounded by the giants of the Himalaya that take our breath away. And an ascent of a couple of hours to the peak of Kala Pattar (5550m) will offer us the most spectacular views of the highest peak in the world.

-TENGBOCHE MONASTERY
Visit the land of the Sherpas with our trekking Tengboche Monastery and get inspired by the magic of one of the Highest Buddhist monasteries in the world (3860m). With more than a century of history, the Tengboche Monastery, the largest in the area, has been rebuilt twice in the past due to an earthquake and a fire. A mystical journey that will transport us to the Buddhist culture of the Solukhumbu area, surrounded by majestic peaks and some of the highest mountains in the world; Everest (8848m), Lhotse (8516m), Nuptse (7861m), Ama Dablam (6812m), Thamerseku (6608m).

-GOKYO & TENGBOCHE
The Gokyo trek includes most of the most prominent sites around the Sagarmatha National Park. We discover the amazing views of the Everest mountain range from a privileged point of view (Gokyo Ri 5357m), the beauty of the Gokyo lakes surrounded by gigantic peaks, the Renjo La Pass and the magic of one of the highest Buddhist Monasteries in the world with a very powerful story. Rebuilt twice due to an earthquake (1934) and a fire (1989), the Tengboche Monastery was strategically built on the top of a hill with a panorama of north, west and south of the Solukhumbu Valley.

-AMA DABLAM BASE CAMP
This is one of the best options to discover the essence and nature of the Sagarmatha National Park in less days than it takes to go to the Everest Base Camp. Enter to the wonderful world of the Sherpas.

The Ama Dablam Base Camp trek is a perfect introduction to trekking in the Everest region. This trekking offers comfortable accommodation in the lodges and we have included 2 nights of stay in Pangboche, one of the oldest and most important villages in the region, from where we can walk to the base camp of Ama Dablam and return.

The trekking of Ama Dablam Base Camp has some days away from the crowded popular trails, and is considered as a short trekking in the region of Khumbu (9 days of trek) for those who have about 2 weeks of time and want to explore the Himalayas of Nepal and some exceptional Unesco World Heritage places in Kathmandu.

-CHO LA PASS
This hike will allow you to see the three most incredible sites in the Sagarmatha National Park; Everest Base Camp (with summit to Kala Pathar), Gokyo Lakes (with summit to Gokyo Ri) and the Tengboche Buddhist Monastery. The adventure of the Cho La Pass is an ideal challenge for the daring adventurer who is looking for something a little more wildly. The difficult part here is crossing the pass of Cho La (5420m). Cho La trekking offers us views of five of the highest peaks in the world above 8000m: Everest, Cho Oyu, Lhotse, Lhotse-shar and Makalu. Deep and striking green valleys, lush high mountains and bright silver gray peaks emerge in abundance when the trek is made by Cho-La Pass: a rich landscape that can only be called an adventure paradise.

The Cho La Pass trek goes to the Kala Patar viewpoint, followed by the challenging climb through Cho La that finally takes us to the cobalt blue lakes of Gokyo, following the route we go down to Lukla and fly back to Kathmandu leaving our footprints in the shadows of Everest.

-RENJO LA PASS
The Renjo La Pass trek it is a great way to get to know the unique landscapes in this wonderful country of the Himalayas of Nepal. When the snow melts and the sun begins to shine, the walk by the Renjo La Pass expose abruptly its natural beauty in extravagant exhibitions of great peaks that probably can’t be seen anywhere else. The Renjo La is absolutely one of the most exciting trekking areas of the Everest region and one of the most challenging trails to undertake in this area. This short route allows walkers who have limited time to discover Nepal’s most famous nature, and take this adventure amongst breathtaking high mountain landscape. The route goes through the heart of the Khumbu Valley, passing through Namche Bazar, Gokyo and Thame.

-3 PASSES
The3 Everest Passes trekking is the best option for adventurous trekkers that are interested in trekking high passes in the Everest region. A great place to enjoy and experience the high altitude adventure with the smiles of the Himalayas on this breathtaking journey crossing over the 5400m peaks of absolute wild nature with only the sound of crepitus and movement of ice and glaciers, the howling of the cold wind and the breeze accompanied by the sun shining prominently on the heights.

A wonderful experience that will take you away from some of the popular trails of the Everest region and will allow you to see most of the Sagarmatha National Park (Everest Base Camp, passing through the Tengboche Monastery, the Gokyo Lakes and the Thame Valley as well as Namche Bazar and surroundings). The most spectacular views are concentrated in this very trek.

-GOKYO LAKES
The Gokyo Lakes Trek offers an excellent opportunity to have one of the most beautiful views of Everest and it’s range. This trekking is considered as an alternative to trekking to the Base Camp of Everest and offers a magnificent view of the mountain peaks and the Ngozumpa Glacier, the largest of the Himalayas of Nepal. The beauty of the lakes of Gokyo has no equal.
This trek to the lakes of Gokyo (4790m) starts at the Lukla airport, about 40 minutes flight from Kathmandu. From the top of Gokyo Ri (5357m) (the peak that rises in front of the third lake) there are spectacular views of the entire mountain range of the Everest region. The trekking through the lakes of the Gokyo valley puts us in touch with the Sherpa culture and lifestyle.

The luxurious resort in Kongde makes our stay romantic and unique. Kongde is considered a paradise for all nature explorers. One can get lost between the idyllic beauty of the magnificent peaks of the Himalayas and the Sherpa settlement of the Khumbu valley. This hike allows you to explore the Everest region of Nepal in a relatively short and comfortable trip in which we get views of all the main peaks of the Khumbu Valley.