IN THE MONJO’S CLINIC BACKSTAGE

“I never abandoned my dream”

Lhagpa Gelzen Sherpa is a 20 year young man that focused his profesional career towards medicine discipline. His mission, to help people to improve their health in the Solukhumbu District.

Lhagpa was born in Bupsa, a village situated 2 walking days below Lukla (where one of the busiest mountain airports in the world is, at 2800m of altitude, bringing thousands of tourists every year). Bupsa is between Karikola and Paya. It is a mountainous region full of rhododendron forests, the national flower of Nepal, and of picturesque trails that lead from one village to the other on prominent slopes that ascend and descend the mountains throughout the region.

We meet Lhagpa on our special trek that we started in Phaplu (Khumbu District; Everest Region). Alex and I start our adventure in the middle of one of the major festivals in Nepal called Tihar, the festival of lights.

During Tihar, the Nepali Hindu community decorates the inside and the outside of their houses and businesses with lights and mandalas bringing the worship of Laxmi, the Goddess of Wealth, along with the worship of dog, crow, and cow.

After 2 days of walking among the magical forests, passing through numerous rural towns and walking and chatting with the locals of the area, we arrive at Bupsa. 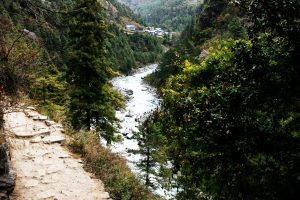 As usual, we try to stay in a lodge that does not have any tourists. Not only because we like escaping from the tourist masses (which is a challenge in certain areas of the Everest region), but also because we like to believe that we help distribute the money in the area in a more equal way…

After a delicious Dal Bhat*[1] that Mingma cooks for us, we are surrounded by practically all the locals of the village of Bupsa. There are not many, so they all fit in the garden of the lodge. A party is about to begin, and we stay in the house where the party of Tihar takes place. We feel privileged and besides enjoying some beautiful traditional dances, we receive a cata*[2] from the community and listen to some speeches that the members of the party do in their local language: Sherpa*[3].

A young boy is the master of ceremonies of the party and performs some speeches that capture the attention of all attendees. This boy is Lhagpa. The day after the celebration, Lhagpa goes to Monjo’s*[4], clinic, to his workplace. What others normally do in two walking days, Lhagpa does it in one. We arrive the next day, and we go to Monjo’s clinic to visit him. We want to know more about him…

Tell us a bit about you

I grew up in a poor family basically supported by agriculture. Since I was a child, I always dreamed of being a doctor and helping people. But that seemed to be difficult to achieve since we had a very difficult economic situation. My destiny seemed to be staying home and following the family tradition working on agriculture.

But, despite the difficulties, did you get to study?

Yes. I received help from the organization “Himalayan Trust Nepal” and I managed to complete my secondary school studies in Khumjung*[5]. This was very good because this way I could access to education and get to fulfill my dream.

“My mother’s death served me as motivation to pursue my dream.”

What moved you to study in the medicine field?

When my mother died, me and my father faced a very difficult economic situation. My mother’s death served me as motivation to pursue my dream; study medicine and help others.

It was difficult for my father to understand that I could have the same opportunities as any other child. He said; “Poor people do not study”, but I never abandoned my dream.

“We cannot control death. We must also accept the rules of nature and understand that sooner or later we all die. Nonetheless, I will try to do my best to save people who would possibly die without help.”*[6]

Lhagpa got very good marks at the Khumjung school in grade 10. That helped him to be selected to study CMA (“Community Medicine Assistant”) in the district of Dhading for 18 months sponsored by the Edmund Hillary Foundation of Canada.

Lhagpa graduated 3 years ago and he has been working in Monjo for 6 months now.

I used to work at Phaplu Hospital (3 days below Lukla walking). But I have moved here and I am very happy.

How long does Monjo’s clinic exist for?

It has been working for 17 years. It was destroyed by the earthquake on April 25th 2015, but we managed to repair it.

How is this clinic maintained?

It is subsidized by the Edmund Hillary Foundation of Canada. This foundation opened a hospital in Khunde*[7], and Monjo’s clinic is run by the Khunde Hospital. Medications and other materials are sent from Khunde.

Do you have to pay for the visit?

Yes. I feel very happy to be able to help people. And especially to be able to participate in teaching the little ones. It is very important that they learn about health and safety so they will avoid having diseases.

“The information and education of people is the best remedy for the prevention of diseases.”

What are the most common health problems of the local people that you treat in this clinic?

The most common problem within the local villagers is respiratory. Many people cough a lot. The area of ??Solukhumbu has a very dry alpine climate, and at the same time is very cold. In addition, the dust raised by the animals and the thousands of people who come to trek affect the respiratory system.

What do you advise them to do?

They should treat their respiratory problems by starting with home remedies such as drinking lots of hot water with ginger, lemon and honey and doing steam inhalations. They should also wear appropriate masks if their day-to-day involves walking the trails (porters, yak and mule farmer, guides …).

What other health problems do you find in the local villagers?

The next problem is gastric. Followed by dermatological infections and muscle and bone pain.

Why do they have these problems so regularly?

The people of rural villages have poor hygiene. That’s why they get stomach infections. Sometimes it is because they do not wash their hands and ingest harmful bacteria for their stomach. Skin wounds, for example, if not washed properly, are easily infected. Many porters come with muscle and bone pains (especially back and knees) because of the weight they carry.

And what about the tourists? Do you receive visits from foreign visitors who come to hike?

What kind of health problems do they have?

First of all gastrointestinal problems. Foreign people are not accustomed to water from Nepal and even less to mountain water. Many tourists have gastrointestinal problems because they do not boil the water they drink or they do not purify the water with pills or other methods. I recommend all tourists who come for the first time to drink boiled water and purified with pills. The second time they come, they can drink the tap water without boiling, only with purifying tablets.

What other reasons do the tourist hikers have to visit you?

The second cause that leads tourists to visit me is falls, ankle sprains, and other injuries.

If there is something you would change or improve what would it be?

We have a Medical Camp organized by Dr. Kami Temba Sherpa, who is in charge of all the hospitals belonging to the Edmund Hillary Foundation. This camp is mounted once every 2 months to attend to the villagers in the area. It is a very complete camp and deals more in depth with the problems of the villagers. With more medicines and resources. I would like this camp to be organized monthly. We lack medicines.

Also, I think that the educational classes that I teach at Monjo’s school in the afternoons to children are very useful. This way I teach them to avoid health problems. The information and education of people is the best remedy for the prevention of diseases.

Lhagpa completed his CMA training “Community Medicine Assistance” with a mark of 90 out of 100. He started working in Monjo 6 months ago, after having worked in Phaplu Hospital previously. Within the first 5 months in Monjo he had already visited 311 patients.

We wish Lhagpa a fantastic experience. It is great to see him helping with so much passion and devotion. Thank you for your attention and dedication to your patients and your work.

Thanks also to Edmund Hillary Foundation Canada and Himalayan Trust Nepal for the fantastic support they give to the community of the Solu Khumbu region.

[1] *Dal Bhat: Typical food of Nepal. Based on rice, lentil soup and seasonal vegetables cooked with spices and hot chilis.

[2] *Cata: fine cloth scarf that the Buddhist community offer to the beloved ones, relatives and acquaintances and they place around the neck in symbol of protection and good luck. A cata is given for different reasons, for those who arrive from a trip, to bid farewell to those who leave, to wish good luck to the couple who marry, to give good luck to a new born baby, to protect and honor guests…

[3] *Sherpa is an ethnic group that comes from the Tibetan population. The Sherpas migrated from Tibet and crossed the mountains, settling in the foothills of the highest mountain in the world, Everest. After Nepal opened the border to tourists in 1951, the Sherpa community became a key aid to the success of Western climbers who wanted to climb the highest mountain in the world (from sea ??level). The Sherpa community, still not understanding why someone would want to do something like this, understood that they had a greater resistance than the visitors, they were strong, and they had an enviable physical condition for the geography and the altitude. This is why “Sherpa” is a concept known as a profession, as well as an ethnic group. The Sherpas became the guides, the porters, those who did the hard work loading all kinds of climbing materials and food, those who took care of the yaks and the mules, those who cooked and prepared the tents for the climbers, those who climbed the mountain first to prepare the fields throughout the expeditions, those who prepared the terrain with ropes and ladders to climb to the highest point in the world… And since then, the Sherpas have remained in this role. They are the heroes of the mountains of Solukhumbu.

[4] *Monjo is the village that leads to the entrance of the Sagarmatha National Park. It is a day walk from Lukla airport.

[5] *Khumjung is located in the heart of Solukhumbu. At 3800m of altitude, it is about an hour walk from Namche Bazar (the most popular village in the Khumbu area from where all the tourists depart to different areas of the region). Khumjung is home to the Khumbu Secondary School sponsored by Edmund Hillary Foundation Canada .

[6] *Lhagpa’s quote: We must understand that in a society like Lhagpa’s, resources and medical infrastructure are extremely scarce. With this in mind, we can imagine that some villagers might die for health reasons that with few resources nowadays it is unthinkable that any person does not recover.

[7] *Khunde, at 3800m high, is located north of Namche Bazar, and west of Khumjung. These 3 populations form the central core of the Sagarmatha National Park. From here, visitors can access the three valleys that comprise the Everest area (roughly: Thame, Gokyo and EBC -Everest Base Camp- areas).